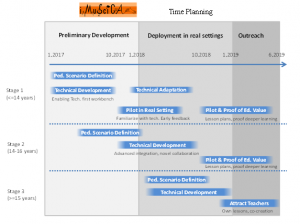 The first phase runs from M1 to M12 of the project and will focus on two strands running in parallel; the first will deal with the pedagogical approach, the analysis of learners’ needs and the development of the first set of lesson plans, while the second will address the technical specifications resulting from the user needs analysis, the development of the necessary adaptations of the core enabling technologies and their first integration in the iMuSciCA workbench. The first version of the iMuSciCA’s prototypes will be used in pilot testing by students, with the focus being on their usability and the interaction with the technology. Similarly, the first version of educational scenarios and lesson plans will be validated by teachers and educators. Along the course of the first phase the following milestones will be reached: (i) MS1: Use case scenarios by learners’ resulting from the educational scenarios, (ii) MS2: Technical specifications of iMuSciCA workbench resulting from use case scenarios, (iii) MS3: First version of the iMuSciCA workbench prototypes, (iv) MS4: Validation of educational scenarios by teachers, and finally, (iv) MS5: Usability test and user-friendliness validation by students

Third Phase (M25-M30): Outreach of the iMuSciCA workbench to teacher communities and stakeholders

Stay Up-to-Date!
Receive the most relevant iMuSciCA's updates by subscribing to our newsletter. Find our privacy policy to learn how we protect and manage your data. iMuSciCA will use the information you provide on this form to be in touch with you and to provide updates. You can change your mind at any time by clicking the unsubscribe link in the footer of any email you receive from us, or by contacting us at imuscica@cabri.com.